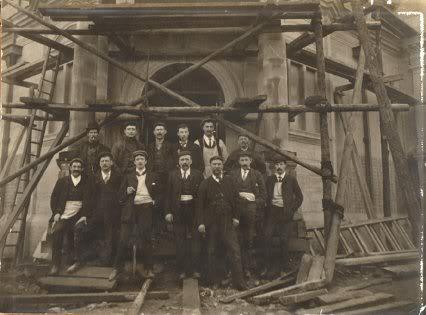 The first public library in Liverpool, a reference library, opened in the Union Newsroom building on the corner of Duke Street and Slater Street in 1852.  The first purpose built library was constructed in 1860 on William Brown Street however library services were slow to develop in areas outside the town centre.  Peter Cowell (1838-1909), Liverpool’s third Chief Librarian (appointed to the post in 1875), was responsible for the programme of construction of branch libraries in Liverpool.

Plans were already in place to construct a branch library in West Derby prior to Andrew Carnegie’s donation.  In June 1900 the Library, Museum and Arts Committee purchased the land and Architect Thomas Shelmerdine was commissioned to draw plans*.  A letter from Andrew Carnegie to Sir William Forwood, dated 16th December 1902, discusses the intention of building and funding the library and reads:

Delighted to hear of the progress of the Toxteth Library.

You mentioned that you wishes to build another such branch somewhere costing about £13’000.  If it would not be considered intrusive I should like to testify my appreciation of the public spirit of Liverpool, and especially of its partnership in the free library movement.  It has a great record, having established a free library before the advent of the Libraries Act.  Besides this, I was deeply impressed by the number of able citizens who give so much of their time, not to aims that end with miserable self, but for good of the community.

I do not make the practice of volunteering.  I depend upon you and such of your other friends that I had the pleasure of meeting, to be sure the offer would be universally received with approval.

Please be sure to consult the late Lord Mayor, my fellow countryman, in your counsels, and believe me

Fifteen tenders were submitted and considered during a Library, Museum and Arts Committee meeting on 27th August 1903.  The second lowest tender of £15’570 by Brown and Blackhouse was accepted.  Construction began in 1903 and was completed by June 1905 when Thomas Shelmerdine advised the Library, Museum and Arts Committee to instruct the Librarian to purchase books. Andrew Carnegie was unable to attend the opening and so instead Sir William Forwood officially opened the library on 27th June 1905.

Sadly, following health and safety concerns, the library closed in 2006 and has remained vacant since.  This period of un-occupation has resulted in the library being subject to theft, vandalism and neglect.  Items stolen from the library include lead flashings, the glazing to roof lights and feature ridge tiles.  There has been substantial rainwater ingress which has severely damaged the timber structure and internal decorative plasterwork and joinery and dry rot is common throughout the building.

In August 2014, following a successful Stage 1 pass from the Heritage Lottery Fund, emergency holding works started in the former library to 'stop the rot'.  The next stage in this iconic buildings history has begun...


With thanks to Alison Doran, John Tiernan and Douglas Wall for their excellent research contributions.

We are very pleased to announce that Shelagh Fogarty has joined Lister Steps as a Patron.  We are looking forward to working with Shelagh to regenerate the former library building.  Shelagh says 'When I was young this Library was a beautiful place to hang out among books and friends. It smelled of polish and wood and when I was there I felt I was somewhere special. I can't wait to see it come back to life. I'll bring the polish!' 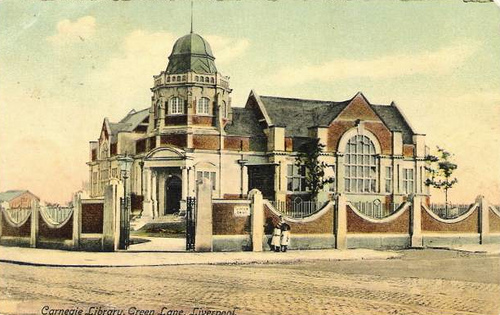 Construction image reproduced with thanks to Shytalk
Powered by